This is the third in a series of using git as part of interesting solutions to problems.

The first is here: Intro

Leveraging git to help with IT tasks

Doing IT for computers involves installing software, configuring things, doing backups, updates, etc. Git can help out with a lot of this, with several big benefits. Some examples:

Some of these things can be done with other tools, but I have found an annexed git repository to make doing these things easier and better

Any time you have a running computer you should be careful about making changes to it that you can’t easily revert. The classic rm -fr / is amongst the most painful, but even a few simple tweaks of a configuration file could cause you minutes or hours of pain if you do them wrong and can’t just start over.

There are many solutions to this problem:

Git can help with a number of different approaches, but I will start with one approach that I find to be among the simplest, most-general, and most-beneficial.

Copy ‘changing’ files into an IT repo

To get a huge step up on the problem, we are going to allocate an annexed git repository to ‘being for IT’. And further we will have every computer out there have its own directory within the repository. A computer’s directory is simply it’s name (e.g. hostname in unix systems). This give us a structure like this:

As long as computers have unique names, we can freely work with any computer’s files without collision with another computer. And because Git is distributed, we can work on files on any computer and merging is very unlikely to be an issue.

An example of an IT repository is at:

and more specifically, the directory for computers is at:

As of this writing, there are two computers listed. Both are EC2 machines, so they have the standard patterns for AWS machine naming.

On each machine, I ran a script to copy from system files to the repository. The scripts are in repo2/bin/copy so a sequence looks like this

Again, because the machines have their own directories, merging should be automatic no matter what order or how much time-overlap occurs. Two notes:

Flattening Computers next to each other

An advantage of flattening out computers next to each other is you can compare them:

In this case it should be apparent that the files have the hostname inside them, so that is what is changing.

Copy files from the IT repo

There is also a script to copy from the IT repo to a particular system location. This is a little more risky, but can be useful at times. Effectively this would roll back your local change if you didn’t touch the repo from anywhere else, and it can be used to document a proposed change before applying it. This leads to more of ‘git for IT automation’ though, which I will cover later.

Software installation is the major part of machine provisioning. Unless you have a fully-baked AMI or really are happy with the factory install, you need to add more software to make your computer useful. Installing software can frequently be done with ‘yum’ and similar commands, but some software needs a package install (e.g. with ‘rpm’) and some times you want more direct control of the version installed.

Fetching RPMs from the web at install time is a major source of automation failure and annoyance. Sites go down and if you are fetching from many different sites, you could have a computer with 9 out of 10 things installed on it. Generally I try to make machine provisioning all or nothing : Either everything gets installed properly or I just wipe the machine and try again. Primordial scripted installs are easy to write (no human interaction), but trying to recover from a partial install is a way to become very unproductive (potentially very angry too). Additionally, some sites can be slow and you don’t want to be penalized by that for every computer you provision.

A solution is to store RPMs and the like in an Annexed Git repository. S3 is both very fast and very reliable, with an SLA that ‘guarantees’ four nines (99.99%) of uptime a year, which is < 1-hour of downtime. If all install packages are stored in S3, provisioning would be almost solely dependent on S3, so it would always be an all (99.99%) or nothing (00.01%) provisioning model.

You could put RPMs and the like anywhere you want since the annexing is orthogonal to file location, but I conventionally put things in ‘it/resource’

An annexed repo will also tend to have a ‘.temp’ directory in the ‘.gitignore’, so that is a handy place to do temporary work without risk of colliding with changes to the repository itself. When you inflate a file, it is ‘dirty’ / changed so it could conflict with a subsequent merge and you would have to either deflate or ‘git checkout’ the file/s to clean up. Worse would be an archive that expanded into a directory structure, so it is generally nice to work in ‘.temp’ where these aspects don’t cause issues.

In giteveryrepo2 there is a Java-7 rpm, which can be installed as follows:

And just to show the install actually works.

should bring up a standard Tomcat welcome screen. 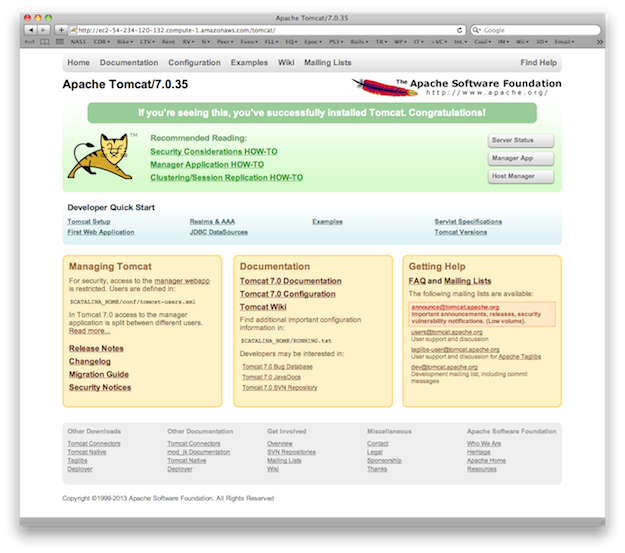 Backing up database dumps, logs, etc. is as easy as copying them into an appropriate folder within the repo and deflating. This is similar to IT changes: you just put things in a reasonable location on the machine and then

By default the Annex has a copy of every ‘big’ file you have ever annexed in the history of the repository. Given S3 doesn’t cost very much, this may never be an issue for you. But if it is an issue, you need to throw out the garbage. There are fancier versions of this process but the simplest involves:

Note that at this point you have the option to delete the old annex or not. If you leave it around you have a ‘shiny new’ cleaner Annex2b which can make some things go faster, but if you ever want to go back to an old version it will work too. Because the annex information is in the version, checking out an old version will automatically switch the annex to use with it too.

An example using the contents of ‘giteveryrepo2’:

It would be ‘more optimal’ to go directly from S3 -> S3, but the above works well enough if you have decent bandwidth and especially if you are within EC2.

Annexed git repositories can make certain IT activities much easier, more reliable, or more powerful (diff two machines’ configurations). The above wasn’t showing IT automation, but it shows a valuable tool for IT automation as well as more manual interactions.

Our next problem will be IT Automation