This is the second series describing the ADD: a radically more productive development and delivery environment. The first article is here: Intro and described the truth and lies about developing software. The second article dealt with ‘Testing’. The third with the application stack (Grails and other technologies).

Of all the technologies that change, the User Interface is by far the most diverse and most evolved. Modern databases are actually pretty old technology. Modern languages are not significantly different from ancestors in the 1970s. Computers have the same main components. Programmers interact with them with keyboards and screens. If you picked well, you are programming better (tens of thousands of hours help) but are sadly on pretty much the same core concepts you learned in your first five thousand hours. Sigh.

Except. Except the User Interface. The implementation of user interfaces has grown since the 70s (the first bit-mapped and mouse-based UIs were built way back then) through Smalltalk, Objective-C, Flash, Flex, Angular, and other paths. But even the devices have changed. An iPhone is not a computer. An Apple Watch is not an iPhone. Times they are a changing… at least for ‘devices’.

The User Interface is also the ‘face’ of a company. It sells the company. Whether to new customers, existing customers, employees, stock holders, or potential investors. A web site like Rumble’s: 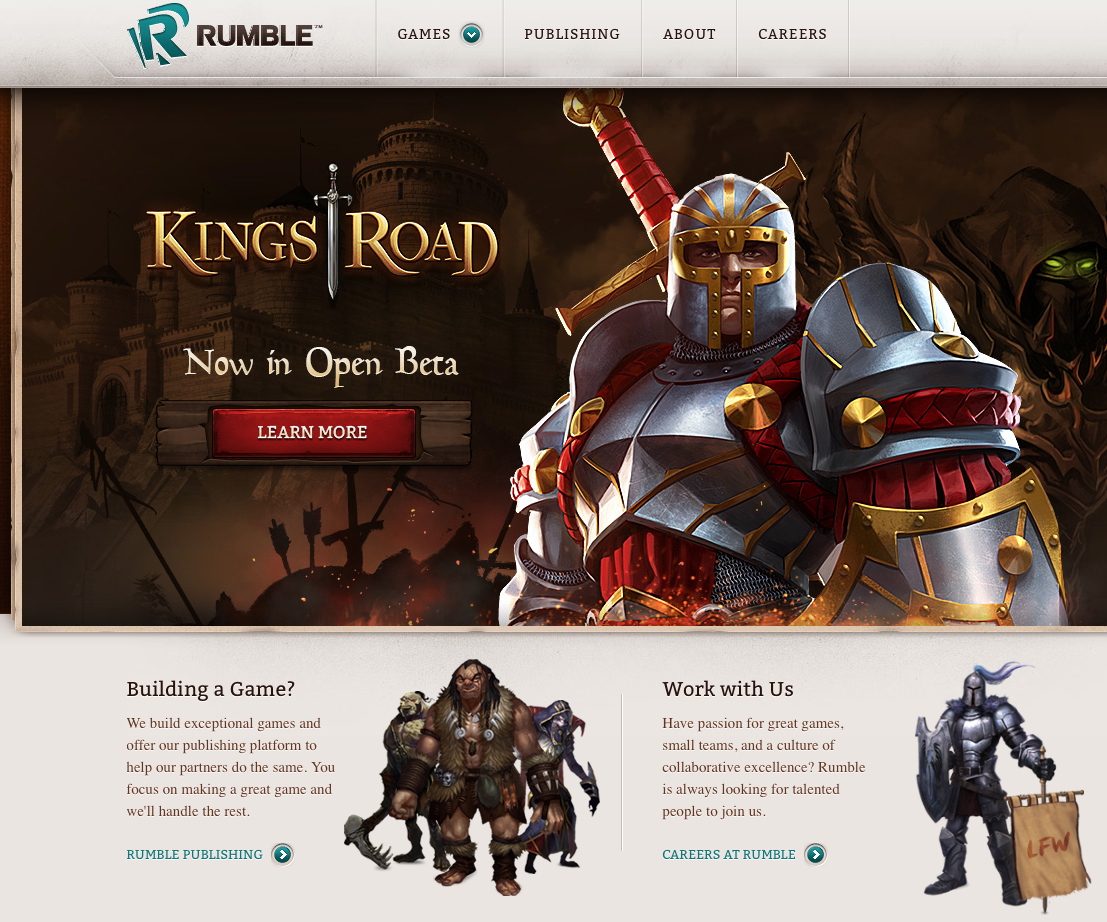 And Rumble’s actual games are trying to appeal to a particular audience (middle aged men) and give them something they want (to feel powerful and sophisticated). 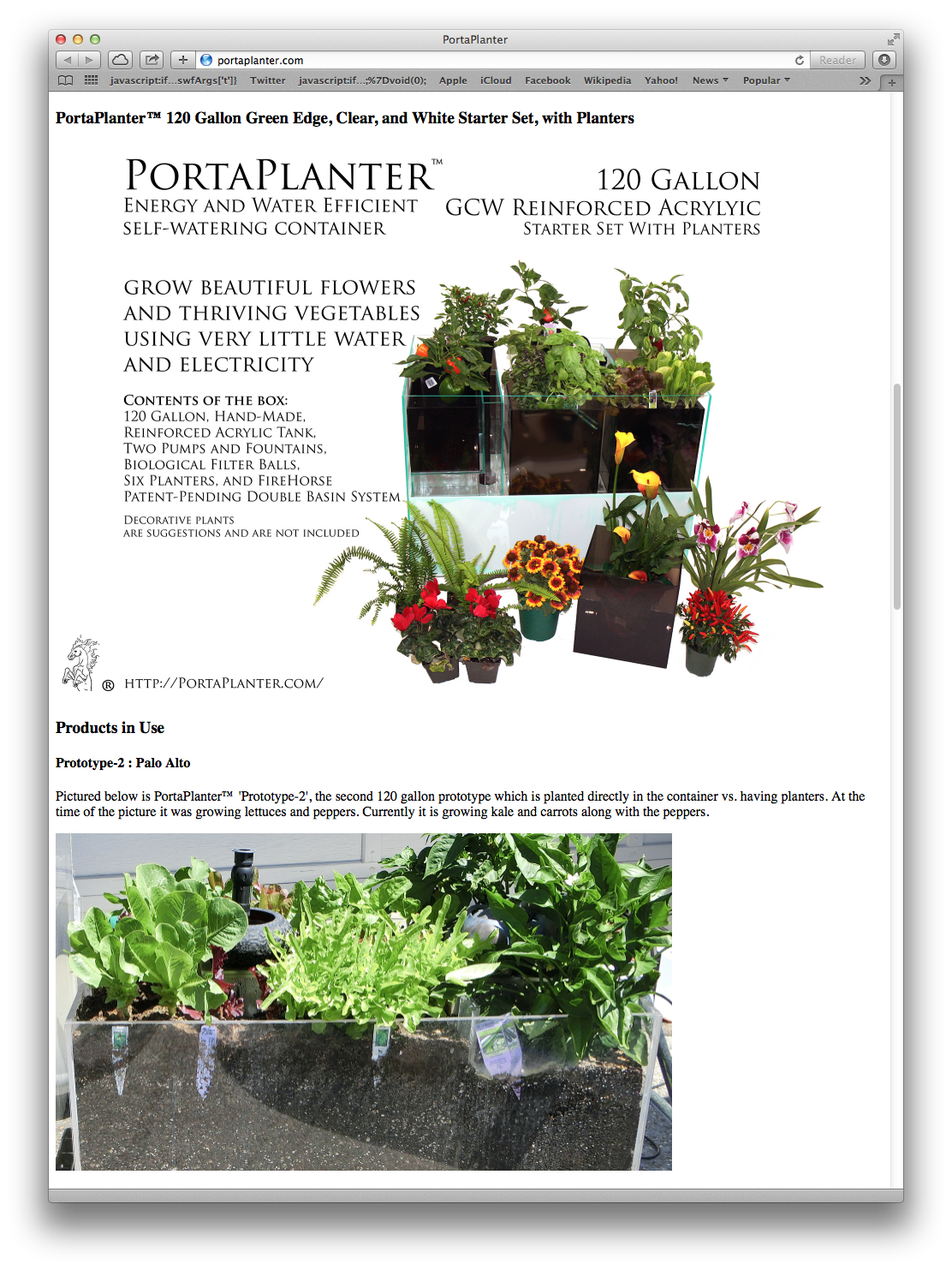 is targeting a different audience (very broad, green-conscious, etc.) and trying to give them something they want (to help the planet) where hopefully the product speaks mostly for itself so there are no “frills” on the page. The PortaPlanter site is currently a bit under-skinned, but even sophisticated product sites tend to mostly show the product in isolation and in use.

The expense of the UI should never be under-estimated. It is by far the most variable expense/investment a company can control about their software products. Like marketing. Build everything perfectly and the UI will be the only thing that can change the cost. Well, next to ‘rapid feature changes’ but that is more controllable because you can turn it on and off. The PortaPlanter web site cost a few thousand (mostly the pictures), is trivial to maintain, and costs nothing to run (static hosting by GitHub). The Rumble web site cost nearly a million dollars, is made from a very sophisticated PHP package which costs thousands of dollars to do significant changes to, and hosting it costs thousands of dollars. That is just the web site of the company, not the games themselves.

What face do you want?

The million-dollar Rumble site was primarily done by a company called Viget who came into Rumble and showed us a bunch of different web sites based on certain aspects we told them we wanted. The CEO and his right hand were the primary ‘Customers’ but we also had a graphic artist that has a great eye for these things. Working among the Rumble and Viget teams, we got what you see above. It is implemented in Expression Engine (a PHP engine), but the design and the capabilities are the driving factor behind it’s cost not the implementation technology (although EE is overkill).

Using a firm like Viget is one approach, but another is to simply figure out what you want to look like. Jerry Kaplan founded ‘Winster’ to be an online gambling company. That was originally illegal, so he pivoted a bit, but if you look at the site… it looks like Vegas or Reno: 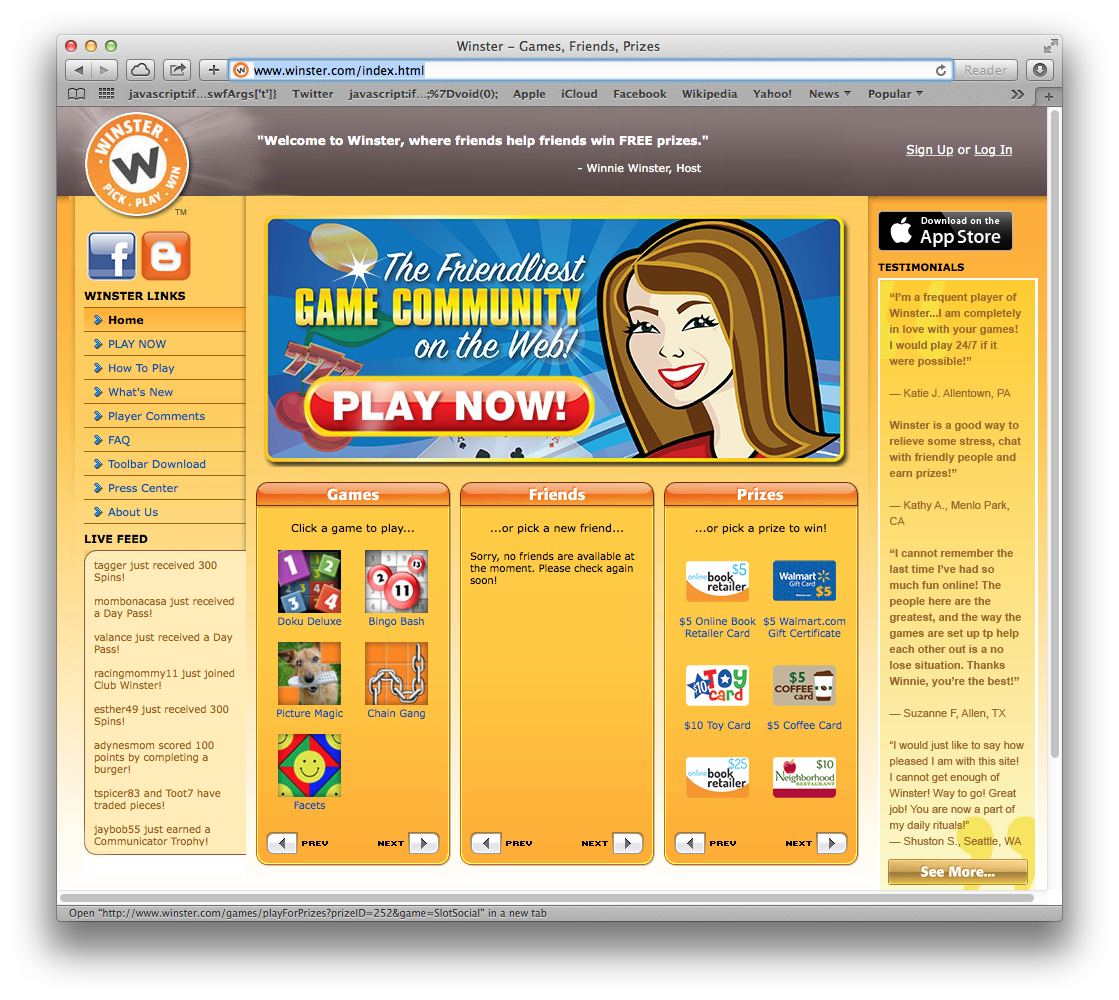 This is exactly what Jerry wanted. He (the CEO) was the designer and the rest of us just implemented his vision (or face his wrath…)

Turns out this web site is somewhat expensive because it was initially built in Flash and Flex (and when ‘converted’ Jerry wanted to keep the feel). So it needs to be quirkier than most web sites in spite of its graphic and content simplicity.

For all of my most recent startups, the Face was a huge part:

and each one had a different front-end technology in spite of being written mostly by me and having fairly similar back-end technologies (Java, Rails, and Grails). This isn’t because I like swapping out the front-end. I offered to use Flex for all of them. But Flex isn’t mobile. And the mobile space was of concern to everyone but ‘Winster’.

How do you implement?

By now you may be groaning:

OK. OK. I need to decide what ‘face’ I want. I will… I promise… But what are the choices for implementation? What is ‘plausibly’ in the picture as a best implementation approach for the UI.

This is pretty easy. There are simply three productive and effective choices… with some variants within them.

Some other approaches are ‘Native Application’ or a ‘Native-enhanced web-app’ but those need only be considered for very particular needs.

Among the three main choices, only ‘Server’ vs. ‘Client’ lead down interesting paths. There are lots of ‘static’ tools so that is more an experience and ‘taste’ issue. Markdown is great, but it isn’t for everyone. And SAAS like SquareSpace are very nice if they fill your needs.

The interesting part about server-side rendering is it says nothing about the sophistication of the page. Or the number of pages (could be one… could be 1000). I actually believe that server-side rendering must be considered the default and then you can decide how much to branch off from there. PeerCase was mostly a one-page-application (in Sencha) and most of the client-server interaction was JSON. But there were different versions of the one-page-application depending on what kind of client hit the server. The server bundled up the appropriate resources together and down-they-went. Desktop clients made a lot a ‘asset’ requests because they can handle them concurrently and cache them. Mobile devices got a manifest and did an update in the background.

Grails is great at server-side rendering and can easily use Angular or any framework within each page.

An example of this is the ‘angular-grails3’ project. This is just a grails application that includes angular like this:

and voilà, we have Angular running in a page that can access Grails configuration and application capabilities.

An example of this approach is the ‘grails3-angular-duo’ project which has a:

And although you ‘hit the backend’ to get your first web page, that actual page comes from the frontend build system. And in this case the ‘api’ is pure REST.

Interestingly, the front-end is now a mostly-static web site. The content isn’t static because it depends on JSON, but most everything else is locked down. So this is in some ways less flexible than the server side rendering. Fewer things can change without building another page and sending it out (deploying and referencing it).

OK, so I simplified above to get through the main concepts. Both server-side and separate-client can be transformed into the most powerful approach known to man… the ‘anything goes’ or ‘hybrid’ approach.

The problems with Hybrid approaches are:

The reason for the socket is that you needed to be told of other people’s actions. Some technology (e.g. comet or the socket) that can “push” updates to the client had to be used for this. Early on, a previous architect picked sockets, and although the protocol through the socket improved / evolved, the actual use-of-socket was not swapped out.

Rumble had an extreme hybrid model involving mostly open sockets to game servers, but also ejabberd (XMPP), JSON, and a slew of different technologies solving different problems. The drawback of using third-party technologies is that they bring in different approaches to client-server communication.

The goal of the UI is to present a good, cost-effective, consistent, and sufficiently capable ‘face’ to your users and prospects. There are a number of different approaches that have different benefits.

I recommend starting from the position of server-side rendering because that gives a lot of power with almost no extra cost. It makes people work with the entire application and reduces chances of ‘schisms’ within the development team. On the other hand, ‘separate client’ technologies are quite good and by thinking ‘separate client’ you may produce a somewhat better API. But a ‘schism’ is more likely, testing is harder, and the separate client is less flexible in how it can integrate with the server (at least for ‘free’).