This is the third series describing the ADD: a radically more productive development and delivery environment. The first series starts here: Advanced Development and Delivery and described the core four ingredients of the ADD. The second series starts here: ADD Stack and described the application stack and system components associated with the ADD. Some of these were Java / Grails specific, and some were more general components and capabilities. Together these went through a huge amount of functionality, flexibility, reliability, and scalability. Both for the IT infrastructure (whether on EC2 or on bare hardware) and for the applications on top of that IT infrastructure.

This series assumes you have at least skimmed the other two series, but this one is the summary of the other two. It is an incremental growth of the architecture in a fairly macro sense, where the details are in the other series.

These three ingredients can give individuals and teams 4x or more productivity. And the reason is the same as for ADD. There are two critical roles in any project:

The three ingredients form the core of a three-way Venn diagram, that I will draw in hexagonal rings. 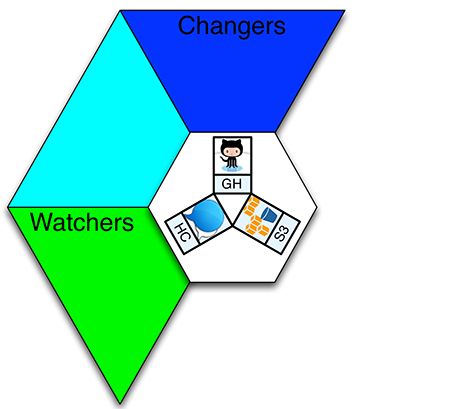 Clearly the three make sense with project collaboration, and all three are used by Changers and Watchers.
Note that ‘Annexes’ are part of the collaboration nucleus. You need annexed repositories for GitHub to be a practical collaboration tool as resources become large.

Now adding the machines in, we get:

And seeing the transformation from the three-ingredient version, we can see the EC2 servers are not critical for Changers and Watchers to interact with each other. Except in the sense that any final product is part of the nucleus that Changers and Watchers want to work on. For ADD it is a deployed application which might be on an EC2 server, and for other product development (books, cars, etc.) it would be that product vs. whatever ”factory” created the product.

So the ADD works outward from the inner collaboration nucleus plus ‘the machines’. In the other series, the tools and system components built out more and more functionality. They were not described this way at the time, but they could be viewed as rings around rings. As the rings worked outward, a specific ADD was defined (e.g. one that was Linux and Java oriented) or a specific application architecture was defined (e.g. on that had workers and relational databases). All the rings are “good rings” in my experience, but especially as you get further out each ring could be swapped with an alternative ‘implementation’ that may be more familiar to the team or somewhat more suited to the domain.

The rings I recommend (and recommended in the series) follow. 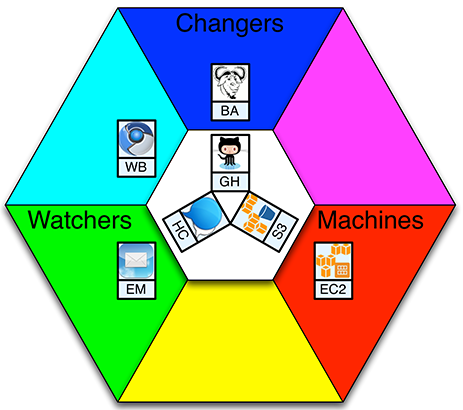 In the bottom right for the machines, I recommend using EC2 as by-far the most mature and capable cloud computing environment. Once you are familiar with EC2, you can compare to other clouds (Google, IBM, EMC, etc.) but you need to see a ‘Real Cloud’ before you can evaluate whether another is good enough. And again, althoug I recommend EC2, very little in the ADD is EC2-specific and it is always in the little details.

Having Linux-capable workstations provides the best Git, automation, and EC2 tools. You can be on Windows, but you will be punished. Even worse when Ring-2 recommends Linux-Servers.

GitHub works fine for reading with Web Browsers, and you can even do updates with it. HipChat is the same: it has an application, but it is not required. And although most collaborative activities should be in HipChat, getting email notifications are quite effective. Finally, like other Agile methodologies, direct ‘talking’ is fine and encouraged, but you need to make sure anything important gets into the collaboration environment (HipChat) and similarly make sure anything private never gets into that collaboration environment. 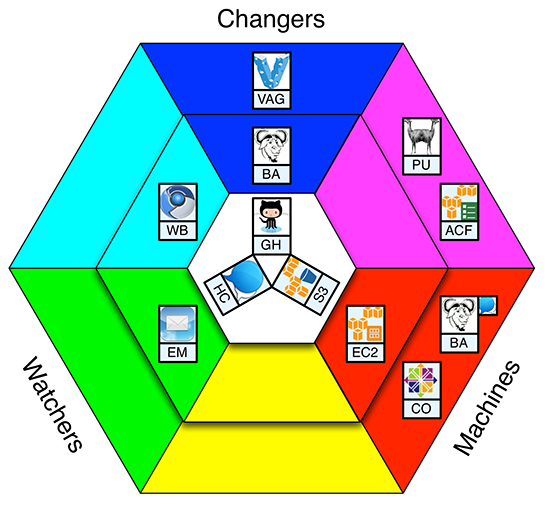 Ring-2 is where the ADD starts coming truly alive and the machines ‘react’ to the ADD infrastructure as well as notify the ADD infrastructure of what is going on. Linux-based servers (ec2 defaults to a Centos variant) are the most flexible, documented, and capable on the AWS (and most other) cloud infrastructures. So this is an obvious choice. Using Amazon CloudFormations is not required, but is a very simple to understand model and well supported in AWS. Defaulting to using ‘bash’ for scripting basically makes you ‘agnostic’ beyond the Linux part. People who don’t know bash programming ‘bash on bash’, but it is a perfectly reasonable scripting language with slightly esoteric notation.

The PushMePullYou model is the core to mass, understandable, and fast automation. You don’t touch machines, you touch Git repositories, push the request (letting everyone know the request), and the machines pull it and react as appropriate.

Developers/changers can use Vagrant to run and test everything very much like production is running, including having their local machines come into the PushMePullYou model.

Finally, Git, machines, and other components should always post into HipChat so people can see what they are doing. 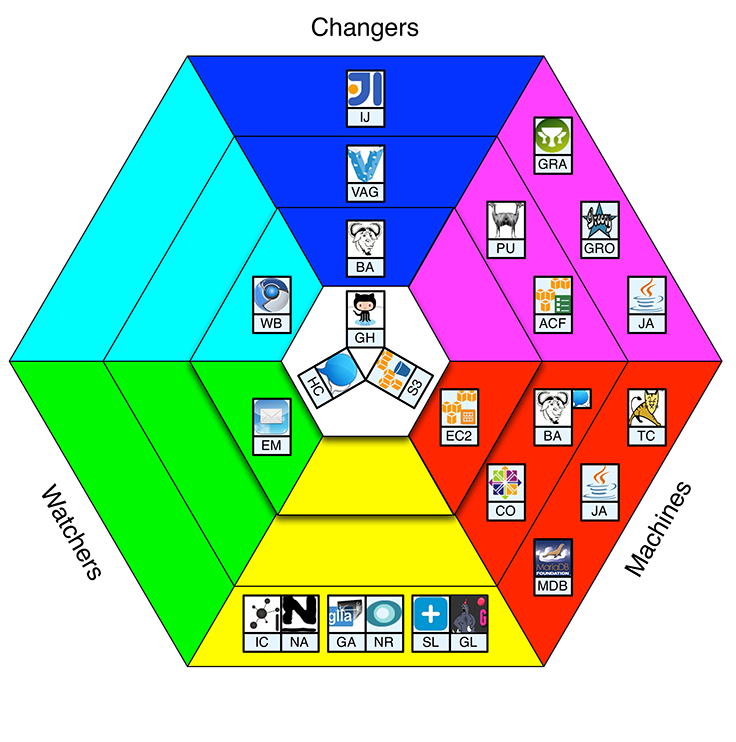 Ring-3 augments the ADD into a good Java-based stack. Both in production (a JVM running Tomcat) and for development (IntelliJ with a Grails/Spring stack). By this ring we can develop software, deploy it, and monitor whether it is functioning properly. 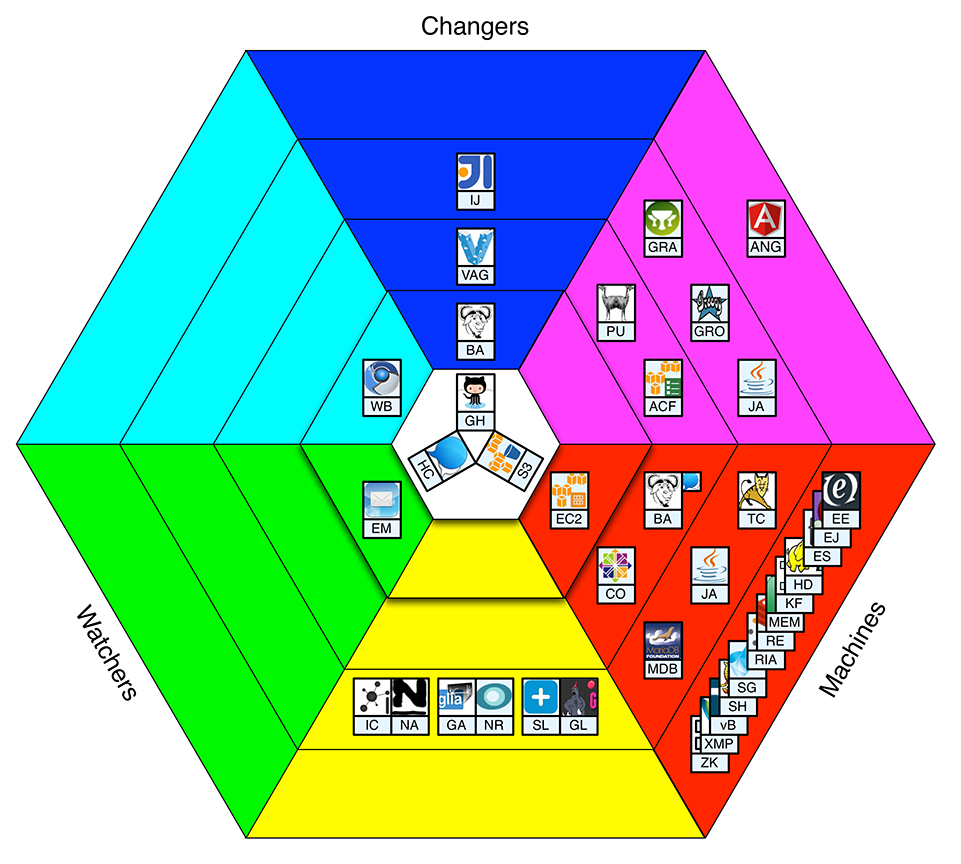 Ring-4 finishes off most of our application functionality. We need to pick a UI framework beyond generating web pages / CSS / jQuery (those are all part of Grails) if we want functionality beyond the core UI from Grails / Spring. And we can augment our application servers with any of a host of components / technologies (as few as possible, but better to use them then to build ourselves… usually).

The ADD can be thought of as rings around a “collaboration nucleus”. The nucleus and the first two rings define the ADD approach and it’s benefits, where the subsequent rings tailor the ADD to the characteristics of good software development and high-quality production deployment.