This is the sixth installment of describing a radically more productive development and delivery environment.

The first part is here: Intro. In the previous parts I described the big picture, Vagrant and EC2, node initialization, the one minute configuration HeartBeat, and HipChat integration.

Each node plays a singular ‘Part’. A ‘part’ is a unique combination of roles (in the chef sense) that identifies exactly how the node should be provisioned, usually globally, but at least for each stacktype. A standard array of parts would be the LAMP stack:

The most interesting thing about parts is hooking them together. Load balancers need to know about application servers. Application servers need to know where the databases are. This feature I call ‘presence’. There are a lot of fancy ways to solve ‘presence’. There could be ‘presence’ servers that servers register with. Or ‘presence’ servers that poll AWS registries. Certain products keep their ‘CI’ (Configuration Item) information in databases: both SQL and other kinds.

All of this is stupidly complex and treats the nodes as if they are idiots. Pretty sure these nodes can be made about as smart as a young student (say elementary school or even younger). A young person is perfectly capable of putting their name on a list. And then listing some other interesting things about them. A node can do the same. So all we need is a list. The classic list for a computer? A folder. A folder containing files. A file named after a node’s unique name. And a file containing information about the node. Voila. No SPOF (can have two folders stored differently), and no additional nodes doing something stupidly simple.

So we already have a ‘HeartBeat’ server, all we need are for it to write somewhere what it’s state is. That is quite simple:

This simply writes information in ~/nodeinfo into a JSON file. To make that JSON file a little nicer we python format it. What gets written into the JSON file? Basically anything we want! When? Every minute! Ta Da… the trick is done.

And with the above script we get this simple and beautiful view: 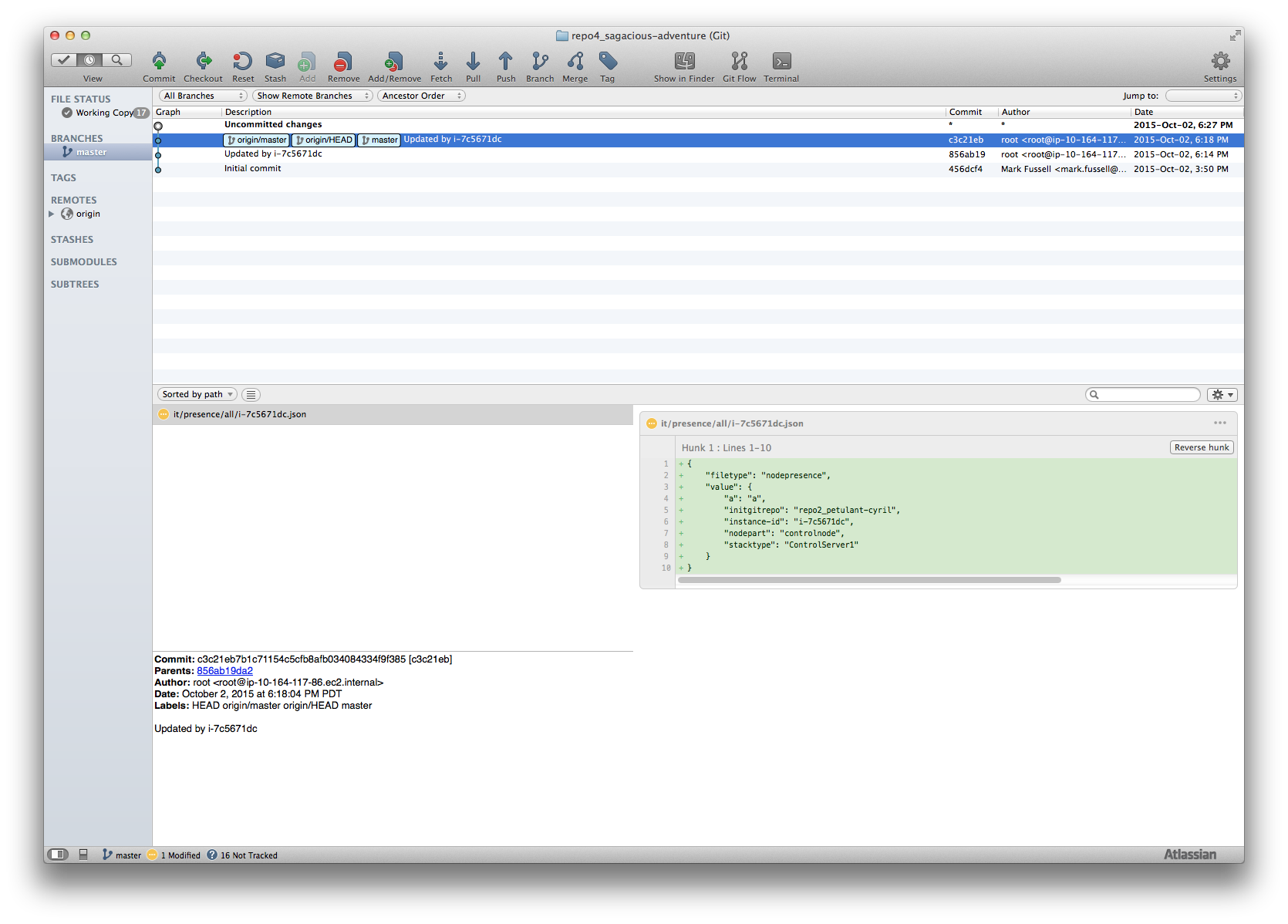 OK, updating a GitHub repository every minute is not the smartest thing to do at scale… but: if the file is the same, Git won’t do anything. And if we want, we can always turn down the noise.

A machine can die or be killed, so presence information could be out of date. The solution is just to broadcast a ‘HeartBeat’ in either the presence repository or another repository. Or to make sure to check if the machine is actually responsive (e.g. HAProxy will interact with the machine to make sure it is actually alive) vs. being present. This final interaction is pretty critical (no Zombies in my data center), so that is the best way to figure out who is alive and alert vs. just being present.